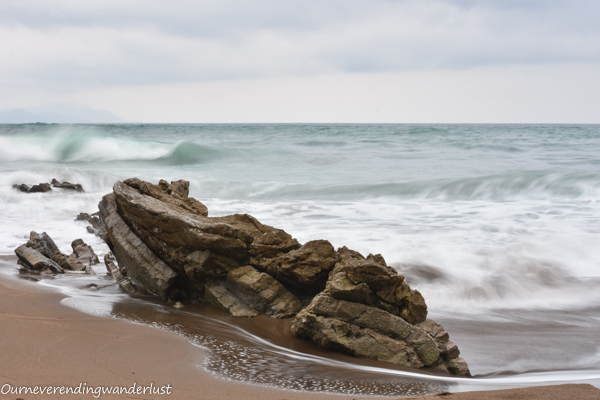 Have you ever watched the Game of Thrones? We have watched all seasons up to season 6, we are waiting for season 7 to get out on DVD. Besides the DVD I have read all the books and I am still waiting on the next one in the series.

While we were in Basque Country we had the opportunity to visit two sights that will make their appearance in the Game of Thrones season 7.

Today I will share one of these sights with you.

The beach of Itzurun in Zumaia, Spain. The campsite we stayed at was on a 10 minute drive from Zumaia. We actually had no clue this beach featured in the Game of Thrones until the last week of our stay.

We were grocery shopping in Zumaia and Andy stayed outside at the grocery store, because we already had bought some veggies at a small store in town.

While he was waiting on me a local started to talk to him. When I came out of the store the local was showing him a Youtube video of Zumaia and the Geoparc and telling us he had seen Kaleeshi at the beach in Zumaia. At first I thought he was playing us, so we looked it up and found out that they did shoot some scenes right there.

Besides the Game of Thrones Zumaia lays within the Geoparc, which is famous for it Flysch. The flysch are only visible when the tide is low. On our first day here we hiked from the campsite to Zumaia and we where lucky to witness the Flysch in their full glory, but more on that hike in another blog post. I can tell you it was one of the most beautiful hikes we have done until now.

Zumaia is one of the places I fell in love with in 2017, I seriously could pack up my bags and just move here. There are lots of hiking trails, an amazing beach and the mountains in your backyard. What else does one need?

I will just let the pictures speak for themselves.

Have you ever visited a film location?